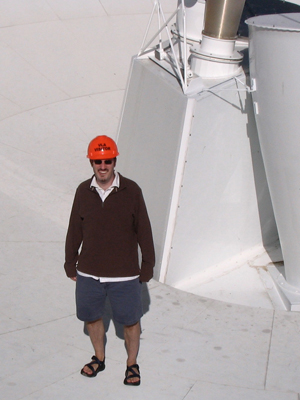 My present focus is on the study of water and organics, combining observation and theory to examine where and how molecules are formed and how they interact with radiation. This aids in our understanding of chemistry, but also increases the use of molecules as probes of the physics of star and planet formation. I was part of a team that showed that ice on the comet Hartley 2 has the same chemical composition as our oceans, supporting the theory that Kuiper-belt comets may have delivered a portion of Earth’s water. I also helped detect vast quantities of cold water vapor in the outer reaches of the star TW Hydrae’s planet-forming disk, which sets important constraints on the amount of water available to form Earth-like worlds.

Supported by a team of excellent young students and postdoctoral fellows, I have helped to clarify the fate and disposition of key life-fostering species, such as water, during evolutionary stages when planets are being born. With then-graduate student Ilse Cleeves (now postdoctoral fellow at the Harvard-Smithsonian Center for Astrophysics), we explored the ionization environment of the planet-forming disk – which is a central facet for the disk’s physical (think star and planet formation) and chemical evolution (composition of terrestrial worlds and gas giants). We found that galactic cosmic rays, a main contributor to the ionization, were likely not present, which has important implications for how planets are born but also for the origin of water on our planet. We showed that, without the ionizing power of cosmic rays, the overall chemical evolution of the disk requires that all water in the solar system first formed a million years before the birth of our Sun. More recently, with colleague Edith Falgarone in France, we have detected an energy-tracing molecule (CH+) in the halos surrounding starburst galaxies that are forming during the peak of star formation in the universe. This tells a tale of how these galaxies form stars over long periods of time.

My goal is to understand how planets are born, with an emphasis on life-bearing worlds such as our own. To expand our current understanding, I will explore the chemical conditions that exist as planets are born and seek to determine the link between this composition and the final composition of planets in our solar system and others.