From 2008-2015, I led an international team – dubbed ‘HEXOS’ – of more than 60 scientists in exploring the origins of organics in interstellar space. For background, we know that stars – which are born out of gas clouds of hydrogen molecules – are also chemical ‘factories’: factories that use carbon, oxygen, nitrogen and hydrogen to make a vast array of organic molecules. Just as the chemistry of life is carbon-based, so too is the chemistry that predates the birth of our planet and others. These interstellar chemical factories are quite prolific when seen in the materials associated with the birth of stars more massive than our own Sun. Generating heat roughly 10 to 20 times hotter than material that exists before a star is born, they are known as hot cores and are THE places to explore the extent of interstellar chemistry. Why would we want to know about this? We know from comets and meteorites in our own solar system that organic compounds were supplied to Earth at its birth. These materials might have aided in the origin of life, and the organics in meteorites and comets owe their own origin to the chemistry of interstellar space. In a way, we are probing the beginnings of organic chemistry.

The HEXOS team used the Herschel Space Observatory to view a wide variety of these chemically rich regions. To understand what we saw, you must understand how we find molecules in space. Molecules have motion in space; they spin around and vibrate along chemical bonds. These motions need energy, which is supplied by collisions. But the energy of rotation or vibration in a molecule is quantized (that is, quantum mechanics comes into play), and they can also lose some energy by releasing a photon of light. This photon has a specific amount of energy that corresponds to that quantized rotation or vibration. Quite neatly, we can take our telescopes and “tune” them to the frequency at which a given molecule releases this light. When we detect the light, we know that the molecule is present and can measure how much is there: i.e., determine the chemical composition. HEXOS observed these molecule-rich hot cores and surveyed their molecular emission in regions of the spectrum of light that are hard to access (because our own atmosphere blocks light from interstellar space). The Herschel satellite was above our atmosphere and therefore able to observe some regions of the spectrum of light for the first time.

What did we find? Below you see an example of one of our spectra (what we call a sampling of the spectrum of light that we can access), where all of the lines that rise up are molecules telling us they are there. In this object alone, we detected 79 individual molecules; that really tells a tale of a rich chemistry by interstellar standards. This work was led by my then-student, Nathan Crockett, assisted at Michigan by postdoctoral fellows Justin Neill and Cecile Favre. In summary, through HEXOS we have provided a near-complete census of the most abundant species in best template objects in space. This is a gold mine for understanding chemical synthesis in these exotic, but fundamental regions. 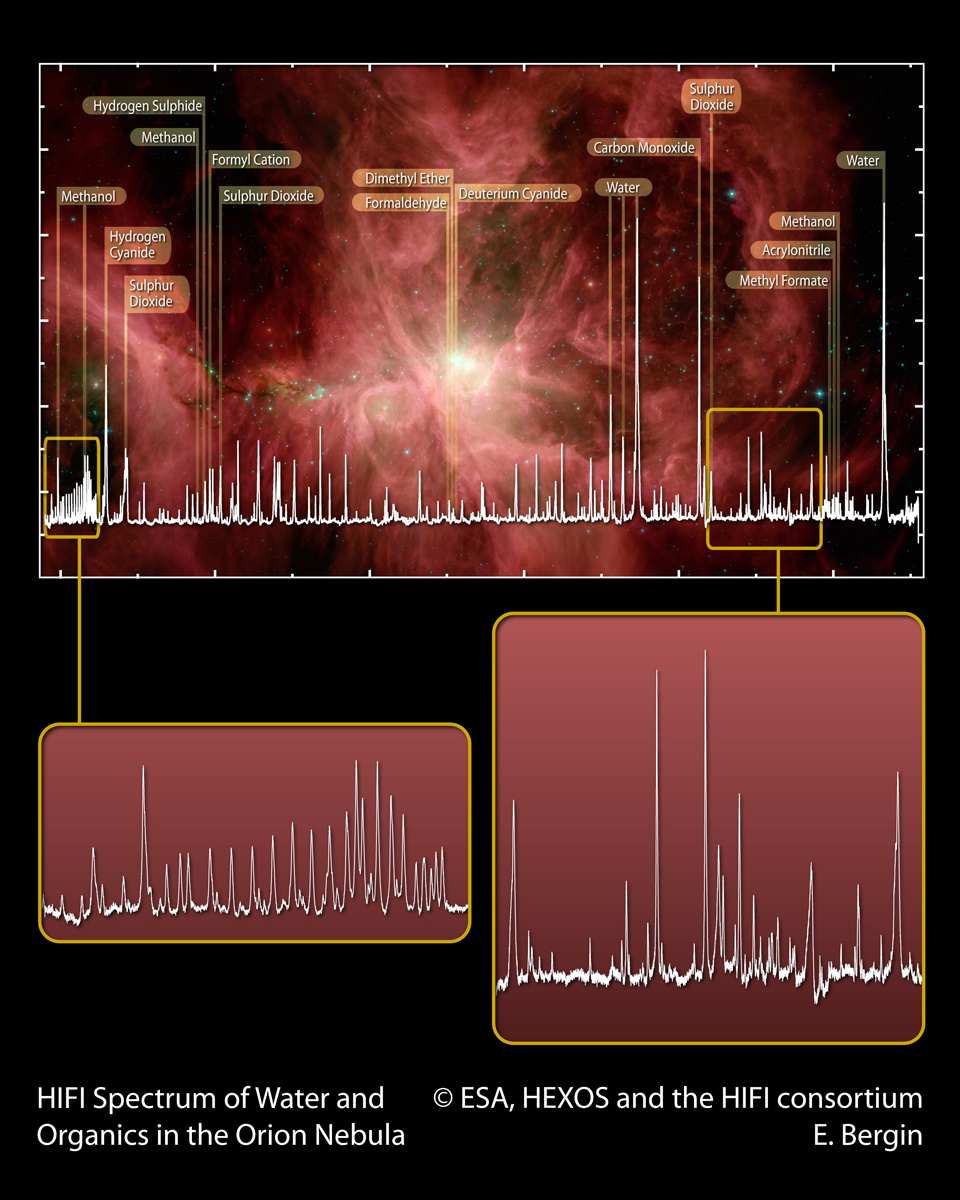